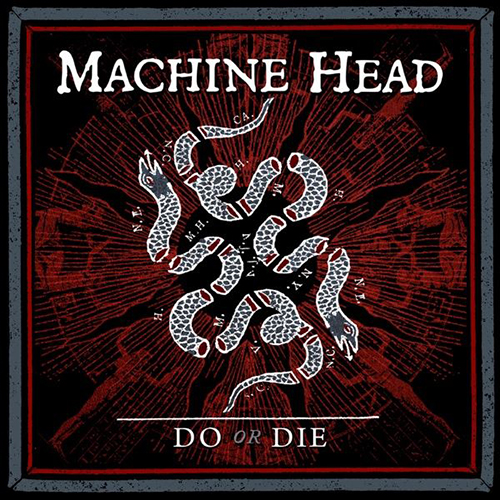 MACHINE HEAD frontman Robb Flynn about "Do Or Die":
"It has been done forever. I've been waiting to fucking drop it with these fucking dates," he said. "It's taking for-goddamn-ever. So, now that we finally got the dates, we're gonna be dropping some new shit for you."

Robb Flynn describes it as "three minutes and 45 seconds of unadulterated, neanderthal rage." Adding, "Fuck everyone!"

According to Flynn, "Do Or Die" was recorded last December with the help of WARBRINGER drummer Carlos Cruz, who stepped in to play on the track following the departure of MACHINE HEAD's longtime drummer Dave McClain.

"I had just been wanting to make music, and so right after we got done with the last tour, I was, like, 'I've gotta make music,'" Flynn explained. "I had all these fucking songs written for months now, since April 2018, and I wanted to go and write them and record them and jam them with the dudes. So my engineer Zack [Ohren] arranged for Carlos Cruz, who is the drummer for WARBRINGER. He played in POWER TRIP â€” an awesome new, modern thrash band. Sick-ass drummer â€” awesome drummer. Young guy, really cool. He came up and jammed with Jared [MacEachern, bass] and I. [He] just fucking killed it. It was awesome playing with him. And it really inspired me, kind of brought me out of my funk. I'd been really wanting to write new music for a while, and it was just right place, right time. The dude was amazing, and I can never be grateful enough for everything that he brought to the table. Awesome dude."

Jared about the video (that you can see below):
â€œIâ€™m blown away at how this video turned out, says bassist Jared MacEachern. â€œI was fucking pumped up after my first viewing. A pissed off song deserves a pissed off video! Itâ€™s a no-holds-barred, in-your-face, fuck off kinda song.â€

"Do Or Die" was produced by Robb Flynn and Zack Ohren (FALLUJAH, ALL SHALL PERISH) at Sharkbite Studios in Oakland, CA. Mixed by Russ Russell (AT THE GATES, NAPLAM DEATH, SIKTH) at Parlour Studios, UK. Mastering was handled by Gene Grimaldi (THE BLACKENING) at Oasis Mastering, Burbank, CA.